The adult coloring-book craze has been garnering some attention from the media.  I’m part of this craze.  I own not one but TWO coloring books, and recently spent some pleasant time in an airport coloring – so pleasant that I was bummed when they started boarding my flight!  But now it turns out that I’m regressing without even realizing it, and am a sad excuse for an adult. 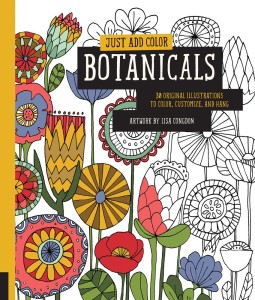 Here’s one of my coloring books, and it is awesome

I read an article from the New Yorker today, about the coloring-books-for-adults trend, and was struck by this passage:

Susan Jacoby, the author of “The Age of American Unreason,” was more unequivocally skeptical of the phenomenon. “There’s a line from the Bible, ‘When I was a child, I thought as a child, but as an adult, I put away childish things,’ ” she said.  “The coloring book is an artifact of a broader cultural shift.  And that cultural shift is a bad thing.”  According to Jacoby, adults who immerse themselves in escapist fantasies like coloring books, camps, and preschool [where participants make crafts with glitter glue, take naps, etc. ] are regressing into safe patterns in order to avoid confronting the world around them. “I think the whole popularity of young-adult literature is a general decline of people not wanting to do things that require effort,” she said.

Ms. Jacoby, while I admire a great deal of your writing, I think you’re off-base on this one. Why are you so threatened by a goddamn coloring book?  Your theory is that those who partake in activities one normally associates with childhood (coloring in a coloring book, crafts with glitter glue, playing recess-type games) are trying to avoid confronting the world around them and “not wanting to do things that require effort.”

There’s so much here to criticize.  Let me start off with Why is avoiding confronting the world seen as a bad thing, or somehow immature? When I chose to put a washer and dryer in my house so that I didn’t have to lug my dirty clothes to a laundromat,  I was trying to avoid confronting the world around me (the world once stole my favorite shirt from a communal washer!).  Yet no one would argue that it’s somehow more virtuous to use a laundromat than it is to do laundry in my own basement.  My recent decision to drive to work rather than taking public transportation is also a way to avoid people.  So is that immature?  Is it more mature to sit on a hot bus with a ton of strangers for 45 minutes, rather than to carpool with a friend for 15 minutes? 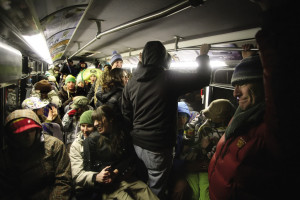 I engaged plenty with the world during the years of K-12, college, and graduate school.  I engage with the world at my job, at the store, at my book club, at the gym, at the doctor’s office….  If I want to spend a couple of hours of my free time coloring in a fucking coloring book, are you seriously going to argue that I shouldn’t because the Bible said I should put away childish things?  Really?!

Here are some other things that are associated with childhood:  slogging through mud, climbing on a jungle gym, and running up and down hills.  They are also associated with obstacle course racing.  Part of the appeal for people (including my husband) who do these events is the fun of getting wet and dirty in ways that most haven’t experienced since childhood.  But the races are also incredibly challenging and taxing, and the level of determination involved disproves your theory that people who enjoy ‘childlike’ activities don’t want to do things that require effort. 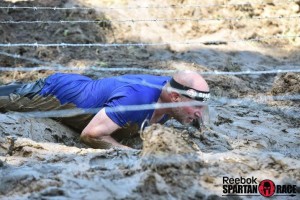 Norman competing in a Spartan race. He thinks getting muddy is fun.

Let me show you what nuance is all about –

Responsible:  paying my mortgage every month, holding down a full-time job, keeping up relationships with family members and friends, and sometimes coloring in an adult coloring book, playing Marco Polo in a swimming pool, or swinging on a swing in my backyard.  Taking my dog to the vet and doing my taxes on time, while enjoying The Hunger Games novels and Dead Wake by Erik Larson equally.

Irresponsible:  spending all the money that would normally go toward my mortgage buying adult coloring books, fancy pens, and tetherball poles for my yard.  Sending dick pics to people who don’t want to see my dick (if I had one).  Telling a friend I’ll meet her for a glass of wine and then not showing up (hey, that one is very grown-up!  Kids don’t meet/ditch their friends at winebars).

Face it, Ms. Jacoby.  The world is not black and white.  You cannot paint those of us who enjoy “childish” activities with that broad of a brush.  (Or your fingers, if you’re finger-painting, which apparently you would never do.)  So long as adults are being responsible, paying their bills, and supporting their loved ones, why is it bad for our culture if they also want to play kickball on the weekend?  I think our culture could do with more happy people trying to recapture a childlike sense of wonder.  Hell, I met my husband at the YMCA when I took his jump-rope class (for adults only, and not because we were naked – oy, the bouncing!).  And I took the class because I remembered how much I’d loved to jump rope when I was a kid. So recapturing my youth has turned out pretty well for me.  And for my parents, who’ll be getting a pretty coloring-book page from their middle-aged daughter to display proudly on their fridge.