The whole point of making a pinata is so that it can be whacked.  But as you can tell, there were many steps involved in creating this Scalia pinata, and it took quite a bit of time.  I highly recommend making your pinata represent someone you’re not that fond of, so that you’ll enjoy seeing people try to destroy it. 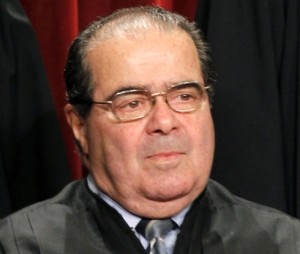 Here’s the man himself – US Supreme Court Justice Antonin Scalia.  He wears his hair in an interesting comb-back, possibly so that he can’t be accused of having a comb-over.  Maybe it’s some sort of Catholic style?  Regardless – it makes for pretty easy painting, so let’s get to that step: 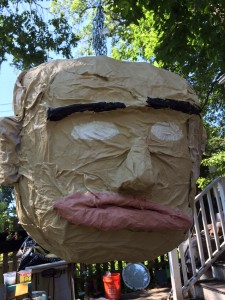 I started with a base of “chamois” by Benjamin Moore, which gives just the right ‘caucasian corpse’ look.  You can probably get a sample pint mixed at your hardware store for about $5.  I had some black, white, and red paint already, to use for his features.  For the lips, I mixed a smidge of red with some of the chamois paint.  The above photo shows the first layer.  His lips were a bit too pretty, so I ended up modifying them. 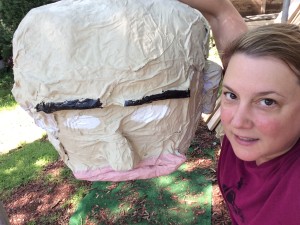 In this one, you get a better idea of the skin tone.  See how much more cadaverous he looks than me?

I painted the Scalia over the course of a day – you need the base to dry before painting the features.  Also, if you use cloth mache there will be a whole lot of creases, wrinkles, etc.  They add some pleasing character to his face but damn they take a long time to paint. 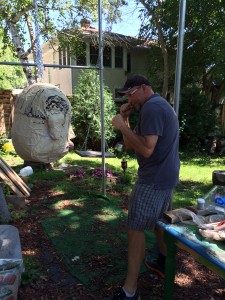 Norman wanted to see if Scalia could take a punch. 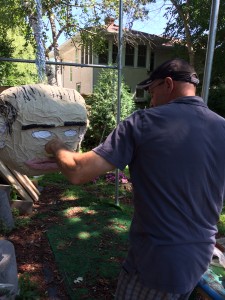 Unfortunately, Norman didn’t realize it wasn’t dry and got paint on his hand. 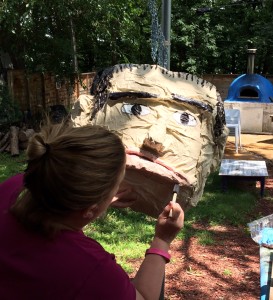 Here I am touching up the lips.  Could ‘makeup artist’ be my next career?  I never really put any on my own face (too lazy) but I greatly enjoyed perfecting Antonin’s lips. 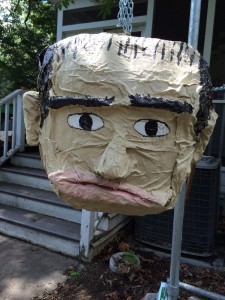 I thought it would be funny to whack the pinata with a gavel – get it?  Like a judge would use?  So I bought this toy gavel on Amazon. 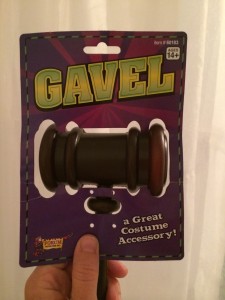 Look closely at the upper-right-hand corner.  It clearly states that this plastic gavel is only for ages 14+.   Well, shit!  We planned to have children hit the Scalia.  What to do, what to do… I ended up buying a Louisville slugger.  There was NO age restriction on it!  Phew! 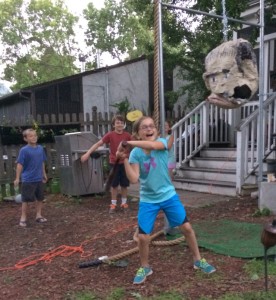 It turns out kids hate Scalia even more than grownups do!  To say they had a good time is putting it mildly.

You may have noticed that although there’s clearly a gaping flesh wound, there’s no candy on the ground.  I didn’t actually put any into the pinata, because it was supposed to be about 150 degrees on Scalia-hitting day and I was afraid it would melt.  So I kept it in the house and brought it out at the point in the demolition when Laffy Taffy and Snickers would normally have fallen.  But the kids weren’t interested in it!  All they wanted was to keep beating the shit out of Scalia! 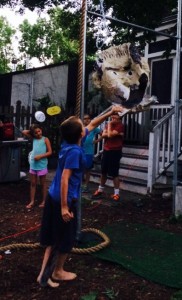 This was after about 100 hits.  If you use the methods in this tutorial you can be assured that everyone will get to take a turn (or fifty).

Here’s one last photo of me with my creation.  Thanks for checking out the tutorial, and I’ve gotta put in one last plug for papier mache artist Dan Reeder of Seattle, without whom this entire endeavor would not have been possible.  Google him, buy his books, send him your winning lottery ticket.  He deserves it!  Okay, now go forth and pinata-ize the planet!